Costume makers and sellers are not the gatekeepers of thoughtfulness. They want to tap in on the trends and provide fodder for those who want to push the line. Or those who want to show some leg. But just like in high school, the sluts ruin everything.*

The Handmaid Tale’s robe and head piece, the symbol of the resistance movement and the #metoo movement, has become slutified just in time for Halloween. The long shapeless red robe and the winged white hat can be seen on women protesting 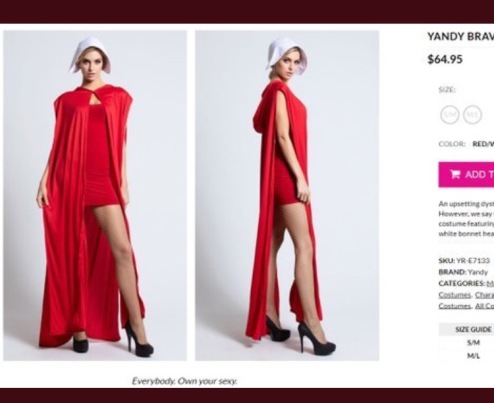 The handmaids, from the book Handmaid’s Tale by Margaret Atwood, were childbearing slaves in a totalitarian theocracy where women had no rights and were forced to bear the children of the elite because the birthrate had dropped significantly. The wore the formless, nunlike red robes and white hats.

I haven’t read this book though I tried. About 27 years ago, my friend recommended this book. But I hated it, perhaps because I was pregnant, but I wasn’t in the mood for a preachy dystopia. When the book became popular again because of the Netflix series, I took a hard pass because the groupthink this book was generating was a turn off.

But as women engage in comparing our current federal officeholder and the regime of the Handmaid’s Tale, here come – on cue – the sluts. Halloween can not take place without  women who want to dress provocatively. Combine that with the desire to make it current, and we have this latest sensation.

*Actually my high school desperately lacked sluts, but I just wanted to relate with the kids or those of you who didn’t attend a Catholic high school in the Rust Belt.

View all posts by mindfull64