Lots of people died the same day as Kobe and his daughter. They will be just as missed by their families and friends. But because Kobe was a public figure, and outstanding athlete who brought joy to a lot of people with his remarkable talent, his life did stand out more in the public sphere. And so does his tragic death, on his way to coach his daughter’s basketball game, doing what he loved with one of his beloved daughters. He was thrilled to be a girldad.

My mom died unexpectedly. She was a few weeks shy of 83. She took the “easy chair way to heaven,” the simple, pain-free death. She didn’t feel good, sat down to rest, and slipped away. The medical examiner thought the heart attack probably took her right away. My dad, who died of cancer 17 years earlier at 65, suffered and fought and came to grips with his death.

I know which way I would chose to die but I know I don’t have that option. I do know that the grief for that unexpected loss of my mom was more difficult. With my father’s death, I comprehended that discordant phrase you hear at funerals, “It’s a blessing.”

Everyone deals with the grief of death, whether it’s expected or not, whether you left 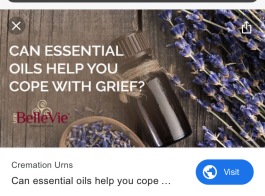 things unsaid, whether you have regrets. GriefShare is a network of support groups that helps survivors deal with this tricky thing. I’ve seen posters for Grief Yoga classes. People journal, people pray. People find creative outlets like making posters of things they love about the one they lost. Some doubt everything they’ve ever believed and have to make peace with the new life they have.

There are as many ways to grieve as there are people.  It, however, is not an easy undertaking and can take years or a lifetime. Grieving also takes time and there isn’t a normal timetable for it.

In 1969 Elizabeth Kubler-Ross broke into the art of grief writing On Grief and Grieving. She introduced the five stages of grief and loss: denial and isolation;  anger; bargaining;  depression;  acceptance. Grievers do not necessarily go through the stages in the same order or experience all of them. But the five steps brought into light a process for a task that is very important.

I sometimes accompanied my mom and grandma in the spring to the cemeteries where the family lay in rest. They’d plant flowers in May and tidy up the area. In the fall, they’d reverse the process. It was a tradition.

Some of my siblings go out to our parents’ grave and put tokens on the marker. They’ll plant and tidy up things too. And talk to them.

I know a young mother who goes to my mother-in-law’s cemetery marker and talks to her as a way of settling and comforting herself even though they aren’t related and never met.

There is one way I don’t find productive. My city has several of these homages to their

dead relatives on the spot closest to where they died. These places are fastidiously and seasonally maintained.  The place where your son’s motorcycle crashed into a pole ending his troubled adulthood seems a place you come to terms with not glorify.

Bringing that grief out of the cemetery and onto the roadways for all to see seems a step beyond healthy grief. I lose the connection to a therapeutic endeavor when you memorialize the public place of death. But I admit that I could be wrong. Quite a few people do it.

Grief is complex; that’s my point. But you should do it the best way you can. It’s good for you.